A downloadable game for Windows and macOS

Date or Die is a horror parody visual novel made as a fun and short Halloween game. You will play as a human transfer student who needs to find a date before the Halloween Dance at Tap School (taken from this website). But wait, turns out not all students who attend the school are humans! Vampires, witches, werecats and even zombies?! And what's with that weird voice in your head? Oh boy, oh boy, try not to get yourself killed before the fun part begins~

*there is a full screen option, but the image becomes slightly stretched

People who kindly allowed me to include their personas (characters) in the game:

[01.11.2017] Updated the name due to request of another game developer who has a game with the same title. Fixed typos in En's route. Fixed Yuu's route text bug.

what a game! I really loved what you did with Echo and Viryse as characters. Keep up the great work! this game is nothing short of splendid.

Quite a comfy and a short visual novel. I have got all of the endings, worth a try and nice to play. The design and graphics were great! Continue doing what you are doing.

one of my viewers asked me to play this on my channel, So far I love it!!!

First death. I'm not sure if it crashed the game or not but here's part 2!

Super cute game!
Viryse was my favorite character, especially her design!
I'm a bit hesitant to ask if cosplay is okay for this game since I think some characters are based on real people. Either way, I enjoyed playing it!

Wow! That was fun!  I was greatly surprised, it might be a bit short, but so many choices to explore!

I cannot stop going back to see all the bad/good ends!

When breaking the 4th wall, the narrator is funny!

4 out of 5. Everything is perfect besides translaition. there are SOOOOOO many grammar errors that it's not even funny. Besides that it has exactly what you want in a visual novel a good story with A-LOT of endings.

If i were to rate this game out of 5 stars i would give it a million stars rating, this game is SOOOO awesome i play it over almost every time i finsih it. I Would love to play more games like this one!

It's a pretty good game, imo. I feel like there's just not enough illustration but it's an amazing game and if i could, i would support this project. Keep up with the good job!

Wonderful story! just played it with my 'sis and it was a beautiful experience. i just had to type this review because it was amazing. for a parody, it was a good one as well. the humour is there when it comes to the narrator and i loved the art style. though, i think there were some things that could'a been added to make it more longer, and there were no bugs as far as i played, it was really cute and i don't regret playing it one bit.

Thank you for the experience! i hope to see you doing many other amazing things in the visual novel community! :)

It was alright. I went through all ends pretty damn fast but they were all kind of the same. The storytelling needs more deception to the reader. Its way to straight forward for a horror visual novel. Its very easy to notice what will happen and choices feel more obvious than vague like they should be.  The art style is great though very cute. In the story with the gym/cat girl a small spelling mistake where viryse will say "Sports club sctivites are cancelled every month." incase you didn't know.  Good job on the visual novel so far.

Okay, but really short and could use some technical tune ups.

No way to change text speed, so either super speed or snail speed.

Ugh, one of the most boring games I've played in a while! I knew I should have deleted it the moment it said no fanservice. What a bore. There are some death bugs, but I suppose it runs pretty fine.

It was fun to try the different  routes but i messed up  with Viryse. pretty sure it was when i locked the door.

welp all that is good must come to an end. Man this game was amazing

here is the third part and gotta say once more, it was a really cute story with really adorable characters. Thanks for creating this game.

ahhh thank you so much for your kind words! i'm glad you enjoyed the game <3

So I released my first video on the series of this game and I had a absolute ball with it!

AHOY THERE THE SECOND PART OF MY GAMEPL......why am i using caps???......welll its done now and i can´t fix it no mater what....ANYWAY second part is out here is the link if ya wish to watch it

Not a yotuber, but I liked the game :P

Anyway, I liked the story and liked it's lack of fanservice (for real, it's a pervert and unnecessary resource). Please update it to give us more and more endings and a longer story.

PS: Clicked on the characters name and realized they are based on creators from tapastic and viryse helped on creation *-* :O
Viryse: I like Extra Ordinary (if the character's hair in the game was black and green i would recognize in the same instant haha)
Yuu: Anti-social media is cool, I like it *-*
Echo: Nop, never heard about you, maybe I'll see your comics.
Engiru: I thing i heard about the toothpaste series, but never read it, maybe i will
(sorry, i got excited here)

Loved playing this game on my channel for halloween! I ended up trying all endings after I got 2 endings on camera, I really hope you go places!

If you enjoy the video consider commenting, liking, even subscribing and sharing! #DatingSim

ahh thank you so much for playing! i'm glad you enjoyed :D

yo there played your game and made a four part gampley of it, hope ya don´t mind

This soundtrack is sooo cute! Especially the art style!! Have you released the music on any platforms, I'd like to share with my friends!! Great game! ^^

Love the game cant wait to try the other play through!
Reply
Viryse1 year ago

Having a great time so far! Definitely interested to see where this goes... Also I'm sorry I destroyed your characters with horrific voices.

Reply
Raithias1 year ago
Enjoyed your art style and, 4th wall breaking narrative. The BGM fit well with the game but, was pretty loud. If I played this on my main channel without adjusting sounds I would have been drowned out! I founds it interesting you put yourself in the game as, the vampire ;) I'm sure most missed that part. I really wanted to go down the nurse path but, I figured that was usually the most chosen option.
Reply
Moface1 year ago

Loved this game so far!!! ^ - ^ Tried to voice all the characters too, but I always kind of fail at that! XD

ahh thank you so much for playing! i enjoyed watching your playthrough > v <

I now have all the routes up on my channel:

ahh thank you for enjoying the game!! <3

hey, um, i think this might be a bug, but i was 'having tea' with Yuu, and when i decided to drink it my screen turned red and i had to exit out of the game...possible bug? maybe, but everyone messes up (ahem, including me ALOT) is this part of the game or a tiny bug?

I really loved the game, but when I was choosing the one of the choices for Echo's route the game just freezes on a red screen.

I loved playing this so much x3

I also made a video for En's Route today, with more coming this week and weekend:

I really enjoyed this game, it was fun and i got every single ending (plus with bad ones) And can i ask you question, if you're gonna create another game like this? Since i really like this one.  Also, what is the Music for En in Yandere mode? I know it's there but the I can't see the youtube Video because it's probably deleted.

Well I must say it was the novel was AMAZING! My favorite part is the 4th wall breaking commentary of the developer since it is so cute and removes the akwardness that some visual novels have :D. The characters are lovely and art is beautiful. And not only the game is amazing but also the developer is too  *notices the animal rescue organisation post*. Perhaps you are should be a full time game developer (or maybe you already are I dont know)? Couse I think you may achieve great heights if you set your mind to it, you would just need some more publicity. And I would really wish to help such awesome developers like you *hug*

Aaaaah sorry for the late reply and thank you so much!! I'm supre glad you liked the game and I'll make sure to make more in the future! Your words are very encouraging > v <b

Hey, its been awhile since I posted my first video for this game. Some stuff came up and I wasn't able to get this out sooner. This is my third episode, I didn't have much to say about the second one and I didn't want to spam you.

Honestly, most of my comments are going to be about echo. I absolutely fell in love with her character, and just overall I enjoyed her story so much. Except for the ending. I just felt like it ended so suddenly, with such a big 180 in her personality, it didn't rea;ly feel fulfilling. And that may just be from how much I came to like the character, i'm not entirely sure. But when everything ended I was genuinely sad and I wanted so much more...

That being said, that ending was really my only complaint. I really enjoyed the game, I thought it was very well made and the stories were really nice. The characters were cute and easy to connect with, and I just ended up getting sucked in way more then I thought I would.

Thank you for creating such a nice game and making it free for people to enjoy, I know I did. And I wish that my videos could bring the game more popularity because I honestly feel like this deserves it. I had a great time playing it and I hope I did the game justice with my playthrough, I definitely tried too.

Aaaah thank you so much for constructive criticism! It was my first game so next time I'll have in mind what you said ^ ^ truth is, the game ended up MUCH longer than planned and it caused some rush from my side so there's that ;; I'm glad you enjoyed the game! Thanks again for leaving a message!

I absolutely adored the game! On the first playthrough, I ended up dying, and I died one other time, but other than that, the game was pretty easy to get the hang of. It was adorable!

Aaah sorry for the late reply! I'm glad you enjoyed the game and thanks for leaving a comment! :> 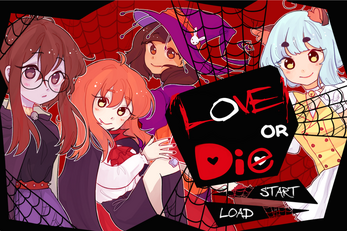 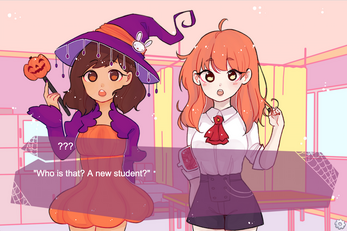 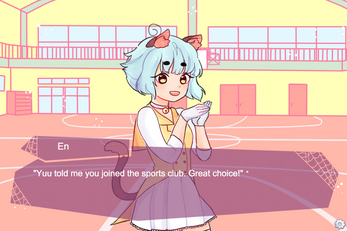 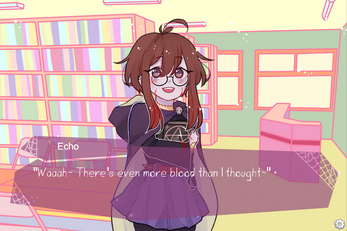